Richmond upon Thames College student, Ahmed Gowiely, has been recognised as the College's 'Best Learner' at an annual award ceremony celebrating the achievements of learners across South London.

Children in Need Bake Off competition

Richmond College raised over £100 for Children in Need on Wednesday 12 November with a Great British Bake Off themed competition.

In April, students from the Skillwise Group in supported learning raised £150 for the Heathrow Special Needs Farm by holding a raffle of unwanted Christmas gifts donated by college staff.

On Monday 11 November, students from Richmond upon Thames College were honoured with prestigious Jack Petchey Achievement Awards at a special ceremony held at Richmond Theatre.

On Tuesday 11 November, students from Richmond upon Thames College were honoured with prestigious Jack Petchey Achievement Awards at a special ceremony held at Richmond Theatre.

RuTC Hosts Goalball for the New Zealand All Blacks

On Friday 3 November, Richmond upon Thames College (RuTC) hosted a goalball session for players from the New Zealand All Blacks rugby team. Sponsored by AIG, the official insurance partner of New Zealand Rugby, the session was organised to bring together AIG’s charity partnerships with the Royal National Institute of Blind People (RNIB) and Endeavour Fund to create a unique experience with the All Blacks while celebrating the power of sport.

Goalball is a team sport for athletes with visual impairments, originally devised in 1946 as a means of assisting the rehabilitation of visually impaired World War II veterans. It is played by two teams of three using a ball with bells inside. The object of the game is to throw the ball into the opposing team's net while defenders attempt to block it with their bodies.

After being introduced to the sport and learning the basics while blindfolded, the five All Blacks players: Damian McKenzie, Waisake Naholo, Ardie Savea, Lima Sopoaga and Codie Taylor teamed up with AIG, Endeavour Fund and RNIB players and went head to head in a series of matches.

RuTC Supported Learning students Georgia Herdman, Paige Ikin, Melisa Showsmith and Yan Rudnicki had the opportunity to meet players from the New Zealand All Blacks. The event took place the day before the All Black defeated the Barbarians at Twickenham Stadium. 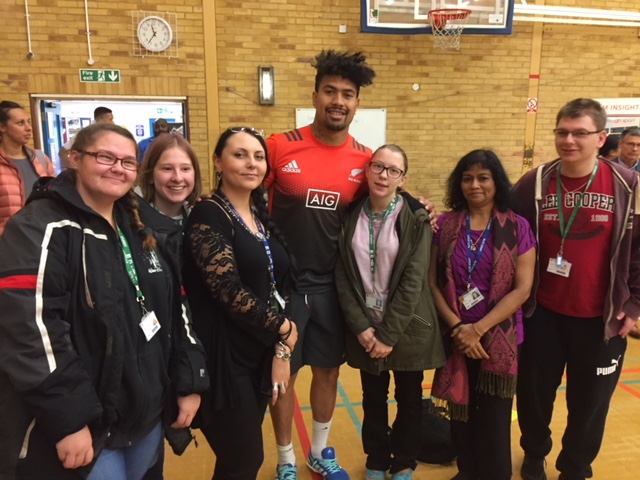 Mark Brough, Sports Development and Facilities Manager at RuTC commented, “It was a pleasure to once again host an AIG sport event at the college. The students and members of the sports team attending enjoyed finding out more about the sport and afterwards expressed an interest in introducing the sport at the college. Students and staff were grateful for the opportunity to attend and have the opportunity to meet some of the players.“

Sarah Davies, Corporate Citizenship and Events Manager at AIG further commented, “We were thrilled to work with RuTC. You provided a fantastic location for the session and it was great to be immersed in the Richmond upon Thames community once again. The players thoroughly enjoyed meeting the students and wish them all the best with their future careers.”

Find out about Supported Learning opportunities at Richmond upon Thames College

Learn about Sports and Exercise courses at RuTC