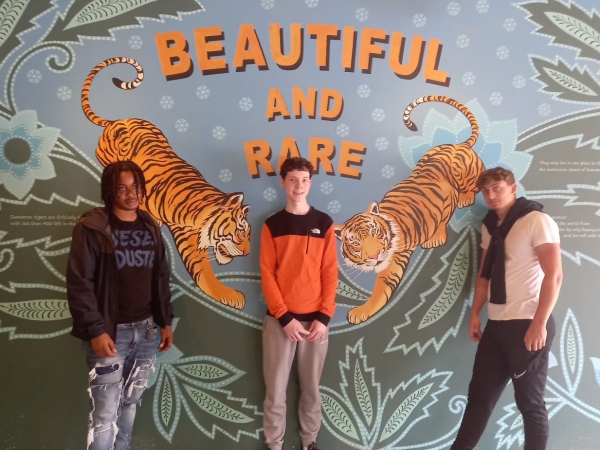 During the summer term, Richmond upon Thames College Level 2 Plumbing student, Harry Powell, winner of the monthly Jack Petchey award used his cash reward of £300 to take himself and two of his classmates, Christian Keers and Daniel Hinds to Zoological Society of London (ZSL).

Harry decided he wanted to use his £300 reward on a trip for himself and his peers that was fun, had an educational value and would be an experience they would remember for a long time.

The students were able to talk with some of the zookeepers on the trip, learning about the important conservation work they do.

Raj Johal, Construction Crafts teacher, was really impressed by the students’ curiosity and passion for the animals they encountered, explaining, “It was quite beautiful to see the young men becoming invested in the animals they were meeting, they were asking lots of good questions and it seemed like a bit of a lightbulb moment when they realised how intersecting nature and humanity are.

“They really enjoyed their trip together; it was a lovely way to wind down and have fun together after a busy year of studying hard. They learnt so much, including seeing a pregnant sloth have an ultrasound! It was an experience they will never forget.

Harry is thankful to the Jack Petchey Foundation reward, saying “It was an inspiring day, I learnt a lot about things I've not even thought about before and I was glad that I chose to use the prize money to help support ZSL and the amazing work they do.

“I’m also very thankful to RUTC and the Jack Petchey Foundation for the work they do for their students.”

Check out the gallery below for some great photos from the ZSL day out.