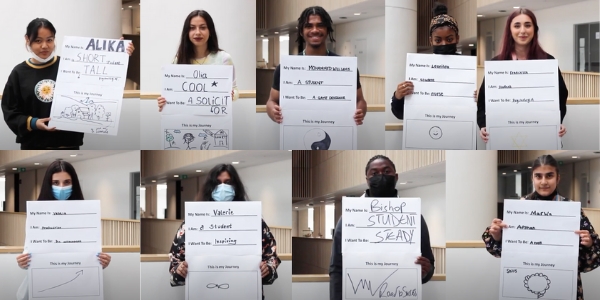 Creative Media Production and Technology Level 2 students were tasked with creating a media campaign promoting equality, diversity and inclusion within the Richmond upon Thames College (RuTC) community. The brief was set by College Principal and CEO, Jason Jones.

Within the brief the students were asked to create a logo, short film and complementary poster campaign, which included original photographs and graphics, for display in the notice boards around the College building.

Creating the short film was a group project, focussing on and making sure each student's voice was heard through the campaign. The winning film was produced by, Shawayne Taylor, Sunal Fernando, Luca Horton and Ergys Mataj.

The film shows how much equality and diversity is valued at RuTC by students and highlights the benefits of having an equal and diverse space for everyone.

Group project winner, Sunal Fernando explains the inspiration behind the logo design, “The whole College community was our inspiration, the logo is a collage of various different skin tone, which come together as a large circle to show that even though we’re different, we come together at RuTC.”

“Equality and diversity are really important now, especially after the Black Lives Matter movement – we know that even in College, we have disadvantaged groups, from ethnic groups to class and income.”

“The College is a really diverse place; we have students of all ages coming from all over London – it was just a matter of illustrating that in a video.”

The EDI (equality, diversity and inclusion) campaign will run throughout this term and will be promoted via the College’s social media channels.

Take a look at the wonderful video below.