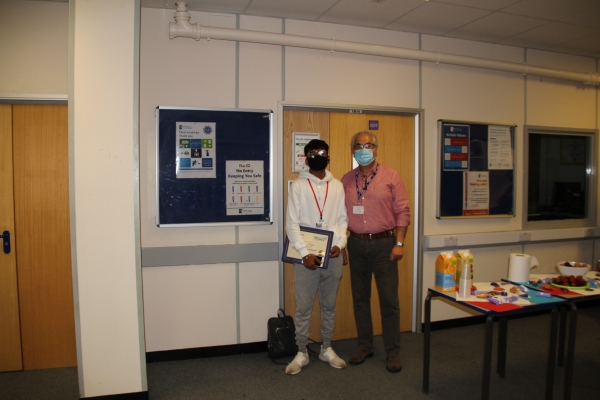 Aryan Dugar receiving his award, with his teacher, Sergik Gharapetian.

Congratulations to Richmond upon Thames College (RuTC) student Aryan Dugar who won the Jack Petchey Achievement Award, having been recognised for his hard work and commitment to the RuTC’s Level 2 Networking and Cybersecurity course.

The Jack Petchey Achievement Award Scheme recognises the positive contributions, efforts and endeavours of young people aged 11-25 across London and Essex. These achievements include being a great role model, volunteering, overcoming personal challenges and supporting others over and above expectations. For the Award, the winner will receive a £250 grant, which can be used for anything that will benefit their class.

Aryan was described by his peers as being “friendly, kind and helpful to others, demonstrating a positive attitude with good organisational and timekeeping skills”. His peers have shown their appreciation for Aryan’s participation within the group by nominating him for the Jack Petchey Achievement Award.

One of Aryans peers says that he was “always attentive and hardworking”, while another said how he was “nice and friendly to others and always helped with anything other students didn’t know and that he supported them in everything they did”. Congratulations to Aryan on his award.

For information on our Networking and Cybersecurity course please click here