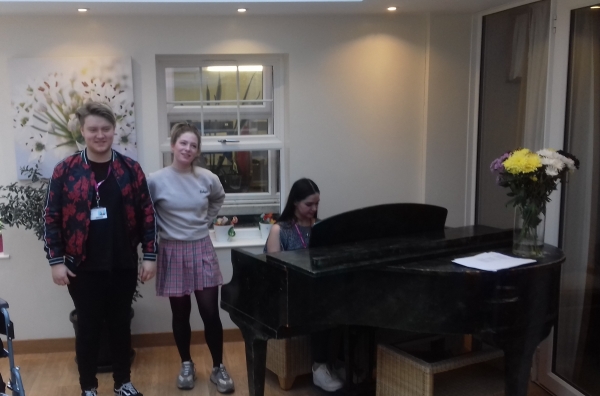 RuTC students and staff have a history of performing for local care home residents. During the winter term, students researched music and psychology with the emphasis on well-being and therapeutic effects of music. This term’s visit to the care home enabled the students to put their research into practice while benefitting the residents at the same time.

Together with Music lecturer Peter Garvey, the students performed contemporary, relaxed and very lyrical music, including Leonard Cohen’s ‘Hallelujah’ and ‘Revelation’ from the film ‘Boy Erased’. One student played her own piano composition and the group performed songs such as Billy Joel’s ‘And so it goes’ which took the residents down memory lane.

Peter said: “The trip to Dalemead Care Home was a great success. The students and I performed appropriate music very well and found it a rewarding experience. Both Dalemead’s staff and our students are keen to go back later this year.”

Find out more about studying Music at RuTC.