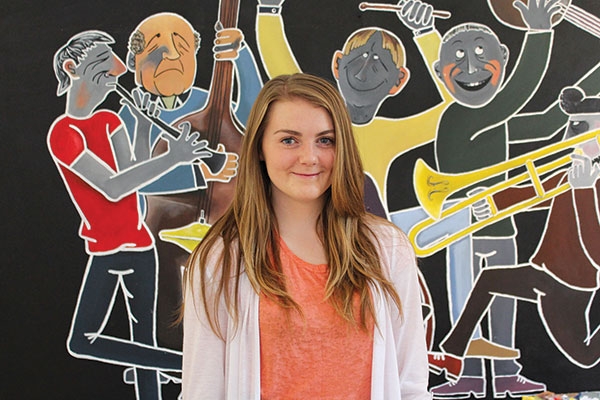 A mural once found in Twickenham's historic Eel Pie Island Hotel has been recreated by Richmond upon Thames College art student, Sarah Blackwell, for an exhibition celebrating the island's unique place in music history.

Sarah, currently studying an Art & Design Foundation Diploma at the College, created the acrylic-based mural as part of the 'Eelpiland' exhibition at The Stables Gallery in Twickenham, after the exhibition's organisers approached the college looking for a talented young artist to help with the project.

Using an old black and white photo of the original mural as her guide, Sarah recreated the jazz band piece over a three-week period, working on the Island itself before the mural was unveiled across the river at Orleans House for the exhibition's launch.

"It was an amazing experience working on the island with so many other talented artists and a privilege to be involved in such a culturally significant exhibition," said Sarah. "I'm really pleased with the end result and will be forever grateful that I've had my own personal taste of the magic of Eel Pie Island."

During the late 1950s and early 1960s, Eel Pie Island Hotel gained fame as both a top jazz and rhythm and blues venue and was visited by a host of music legends including John Lee Hooker, Memphis Slim, The Rolling Stones, Rod Stewart and Eric Clapton. The hotel was demolished by fire in 1971 but its history remains preserved in the stories, poems and songs of the old islanders and the musicians who played there.

'Eelpiland – The Birth of Rhythm and Blues' is running at The Stables Gallery, Orleans House until Sunday 29 September.