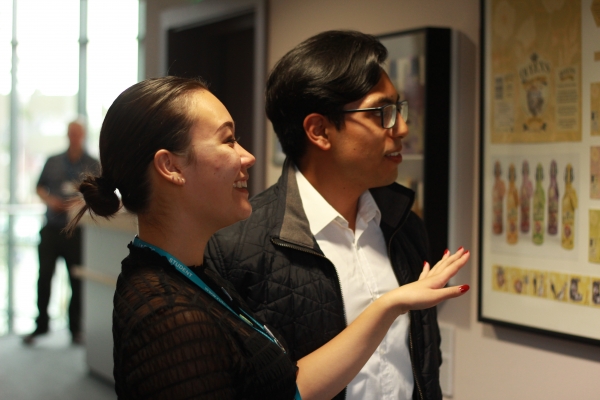 On Wednesday 12th September, Richmond upon Thames College (RuTC) celebrated and showcased past and present students’ designs and illustrations from the past 50 years, with a private viewing held at The Exchange in Twickenham.

Over 55 guests attended the event including Tom Box, RuTC alumnus and co-founder of Blue Zoo Animation Studio. After completing his studies in 1997, Tom went on to study Computer Visualisation & Animation at Bournemouth University, before founding Blue Zoo with three fellow students. As part of the exhibition, Tom presented a showreel of recent company work along with his BAFTA nominated short animation film, Mamoon, which he executively produced.

The exhibition celebrates past alumni and current students’ graphic design work including prints of famous and iconic work from RuTC alumni, Pennie Smith and Barney Bubbles, who contributed to various art and design work associated with the British music scene between the late 1960s and 1980s. The exhibition includes some famous pieces, including the iconic ‘London Calling’ album cover by The Clash, which was photographed by RuTC alumnus, Pennie Smith in 1979.

This FREE exhibition takes place on the first floor of The Exchange and runs until late December.