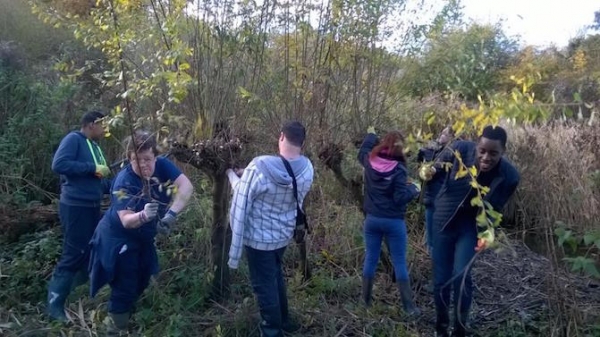 A new 18-month project from London Wildlife Trust is giving 40 young people with learning disabilities the chance to explore and learn about their local natural heritage.

Tailored for and led by young people with disabilities from Richmond upon Thames College, ‘Young Visions’ will engage participants in a range of wildlife-themed activities to help them develop new skills, gain confidence, and learn about the river habitat of Crane Park Island nature reserve in Twickenham. This is thanks to an HLF grant of £44,000.

Once the site of the Hounslow Gunpowder Mills, Crane Park Island is a mosaic of woodland, scrub, ditches, ponds and reedbed, which provides a home to many species, including the rare water vole.

Young Visions has been devised and will be led by a group of young people aged 16 to 25. By putting the direction of the project in the hands of its participants, the Trust hope to break down the barriers that can prevent them enjoying nature and encourage a sense of ownership in their local area. Stuart Hobley, Head of HLF London commented, “Thanks to National Lottery players, Young Visions participants can really get stuck in with some great activities.”

David Lemon, London Wildlife Trust Project Officer, said: “Young people with learning disabilities can face many barriers to getting out and exploring local green spaces and enjoying the benefits of contact with the natural world. Now, thanks to HLF, 40 such youngsters will have a wonderful, hands-on opportunity to discover and investigate a wildlife-rich slice of west London. We can’t wait to work with them on the Young Visions project.”

These hands-on activities include workshops in wildlife photography, woodwork and bushcraft, challenging people to learn survival skills and build a camp for the night. Participants will also have the chance to learn about fishing techniques and how to identify different river species.

The next Sir David Attenborough?

Participants will use underwater and night-time filming to record the reserve’s wildlife and work with a professional filmmaker to create a film showcasing the nature of Crane Park Island.

At the end of the project, films, photographs and other items the participants have made will go on display at the Shot Tower visitor centre next to Crane Park Island.

Stuart Hobley, Head of HLF London, said: “I’m thrilled that we can support the London Wildlife Trust in giving young people this great opportunity to explore and learn about their local natural heritage – and have fun whilst doing it! Thanks to National Lottery players, Young Visions participants can really get stuck in with some great activities, developing their skills as well as a connection to the nature on their doorstep.”

*Note: This press release was originally published by Marcin at Military Technologies