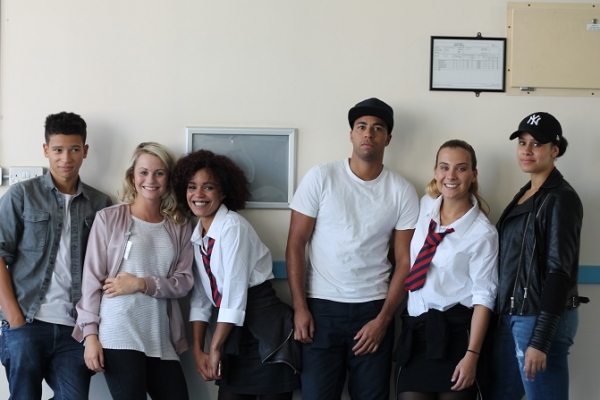 On Friday 23rd September Richmond upon Thames College (RuTC) welcomed Rockendale Management and Production Company into the college to film a new TV series. Executive Producer, Michael Soyannwo, worked with a group of around 20 actors to film a classroom scene with acting students and a Headteacher. The 6 minute scene filmed at RuTC is part of a new TV series (the finer details of which are confidential) being pitched to various channels before full production commences.

Amongst actors was Jacob Angell, former RuTC student, who plays the character of a student named 'Blaze'. Jacob is a Made in Richmond Alumni member as he studied BTEC Performing Arts Level 3 from 2014 - 2016. Jacob commented, "It's very exciting to be back at college filming for a production and I am very grateful for the skills RuTC equipped me with to be involved in such things." Jacob performed in the 2016 Performing Arts Graduation Show and most recently won an award at RuTC's Student Award Ceremony.

Current Performing Arts students have also been invited to participate in the production; 5 students have been recruited as 'extras' for a football match scene. Actors have also been working alongside Donovan Blackwood, who plays the part of the Headteacher and has starred in blockbuster films over the past 2 years including Miss You Already, The Head Hunter and Top Coppers.

The filming took place not long after Volkswagen chose RuTC as the film location for their Tiguan 2016 Advert. RuTC wishes Rockendale Management and Production Company all the best with the new series.

Could not load widget with the id 256.

Book your place at one of the RuTC Open Events for 16-18s starting college in September 2017.