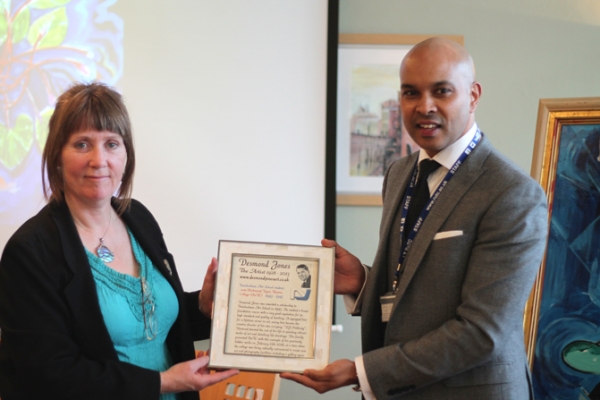 On Friday 12th February Richmond upon Thames College (RuTC) celebrated the life and work of the late Desmond Jones, a local artist and former student of the college. The event was hosted by Merits, RuTC’s training restaurant and was attended by the Mayor of Richmond in addition to Desmond’s friends and family. A selected piece of Desmond’s artwork and accompanying plaque was presented to RuTC’s Principal and CEO, Robin Ghurbhurun, to mark the college’s successful heritage and exciting future. Robin commented: “It is an absolute pleasure to receive artwork which not only highlights our Alumni’s strength of connection to the college, but also marks the start of the college’s new development.”

Desmond enrolled as a student 73 years ago, at which point the college was a combined art school and technical college. His family have recently uncovered his hidden pieces of art work, one of which was generously donated to the college. Desmond won an art scholarship to the college during World War II and went on to spend a lifetime as a professional artist. He concentrated on graphic art before pursuing a career in photography and eventually establishing his own company, where he was creative director. Desmond’s family have documented his career and assembled an online exhibition of his previously hidden art, which can be found at www.desmondjonesart.co.uk