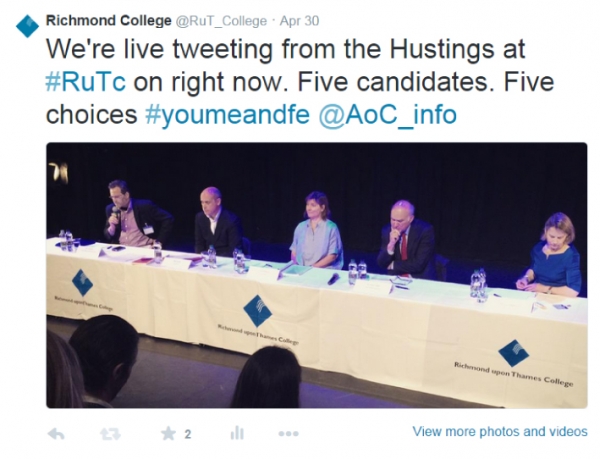 A week before the General Election on May 7, five parliamentary candidates from Twickenham attended a parliamentary hustings at Richmond upon Thames College including; Vince Cable, Liberal Democrats; Barry Edwards, UKIP; Nick Grant, Labour; Tania Mathias, Conservative and Tanya William, Green. The event allowed over 100 students, staff and governors to raise questions concerning local, national and international issues, allowing all involved to make an intelligent decision in next weeks' election.

The event empowered first time voters to take their vote seriously and find out which party represents their beliefs.

Jann Casaga, an A Level student enjoyed the hustings, "It was both informative and exciting to see what the candidates can offer us, as a first time voter I greatly appreciated the opportunity to find out more. It has encouraged me to vote for a party that represents my views in the General Election."

Quotes from the candidates:

Barry Edwards (UKIP) opened the hustings informing the audience that, 'the UK must exist against the threat from the European Union. Overpopulation is our largest threat to climate change, putting our public services at risk.' Edwards concluded, 'UKIP want Westminster to run us, not Brussels.'

Nick Grant (Labour) repeated the statement that, 'Labour's aims are based on fairness, that education funding should be provided up until the age of 19 and that tuition fees would be reduced.' Grant ended his opening remarks, 'Labour will ensure education is open to all, it is the engine of social justice.'

Vince Cable (Liberal Democrats) said, 'I am painfully aware of the severe financial pressure on Further Education colleges, however I will work to ensure that Britain continues to get back on the economic path.'