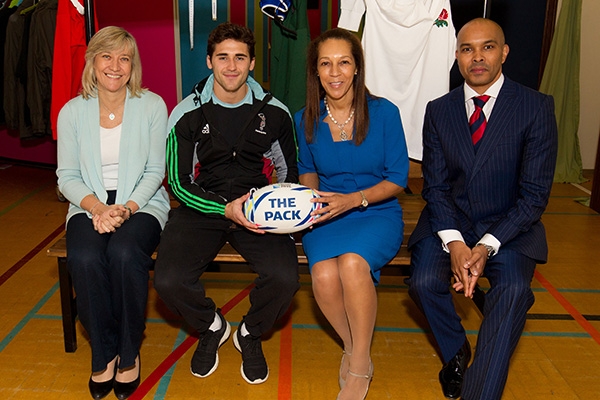 The final leg of the Rugby World Cup 2015 volunteer selection events, the Try Outs, concluded at Richmond upon Thames College on December 16th, following six months on the road.

The search for the 6,000 volunteers was launched in February 2014 and England Rugby 2015 received over 20,000 applications. Over 10,000 applicants have since been part of the Try Outs with events held in every Rugby World Cup 2015 Host City.

England Rugby 2015 CEO, Debbie Jevans, and Minister for Sport, Helen Grant attended the final leg of the Try Outs at Richmond upon Thames College, meeting the volunteers alongside Harlequins' player Ollie Lindsay-Hague. Over 1,700 volunteers passed through over the course of the three weeks, all hoping to secure a coveted place.

Robin Ghurbhurun, Principal and Chief Executive of Richmond upon Thames College, said; "We are delighted to be working closely with England Rugby 2015 by hosting the volunteer Try Outs for Rugby World Cup 2015 on our Twickenham campus. The college shares the same values of leadership, teamwork and resilience as Rugby World Cup 2015 and looks forward to welcoming the world to Twickenham and delivering the best Tournament ever staged."

Minister for Sport Helen Grant, said; "The fantastic turnout for the Try Outs recruitment drive highlights how Rugby World Cup 2015 has captured the excitement and interest of the nation. Speaking to the volunteers today their enthusiasm is infectious. I know those selected will play a vital role in making the Tournament a huge success, helping to grow the game at home and abroad."

The search for The Pack has spanned 1,320 miles, across 13 venues and included over 3,333 hours of interviews. Prospective volunteers have ranged from age 18-85 and enjoyed a unique experience as part of the interactive selection event including; a Rugby exhibition, in house cinema with real Twickenham stadium seats, uniform sizing in a mock changing room with an authentic heat spray scent and the chance to see the coveted Webb Ellis Cup or some of those who lifted it in 2003 with visits from RWC 2003 winners Martin Johnson, Jonny Wilkinson, Josh Lewsey, Jason Robinson and Will Greenwood.