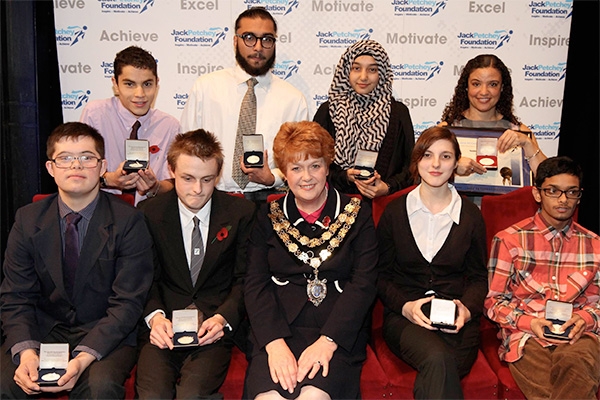 On Tuesday 11 November, students from Richmond upon Thames College were honoured with prestigious Jack Petchey Achievement Awards at a special ceremony held at Richmond Theatre.

Supported Learning students Anthony Casey, Ahmad Ilyas, Peter Freebury, Sam Fielding and Leanne Francis received their awards along with over 100 other students from schools and colleges across Richmond and Kingston. There were also awards for Touba Alemzada, Ahmed Eissa Dar and Jeanne Kenyon, who were nominated by Student Services. College staff member Suzanne Williams received a special Leader Award at the event.

The award-winning students were nominated by their teachers and classmates during the 2013-14 academic year for their positive attitudes in college, support to fellow classmates and outstanding contributions to college life. They each received a certificate and £200 cheque from the Jack Petchey Foundation which was used to fund activities for the winners and their class mates. Suzanne Williams received her leader award in recognition of her work with the supported learning department.

The Jack Petchey Foundation was established in 1999 to recognise the positive contributions young people make to society and to support them in achieving their potential. It has invested £75 million to a wide range of 2,000 youth initiatives across London and Essex. The Achievement Awards programme is aimed at enabling young people to be recognised, valued and rewarded for their achievements and positive contribution to society.

VIPs attending on the night included Councillor Jane Boulton, Mayor of the London Borough of Richmond and Zac Goldsmith MP.