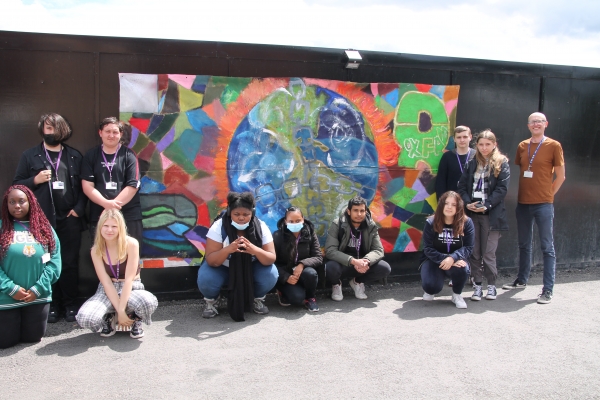 In May, RuTC (Richmond upon Thames College) Art and Design Level 2 students were commissioned by Oxfam Education and Glastonbury Festival to create a banner for both organisation’s annual campaign art project.

In early June, the students finalised and posted the vast art project they had been working on over the past few weeks, to Glastonbury and during the weekend of 23-26 June, the banners were unveiled at the world-renowned festival.

This year’s campaign theme was “Climate Justice” and RuTC students’ artwork depicted the globe in chains, surrounded by a sea of flames, a mosaic of coloured patches alongside Oxfam and RuTC’s logo.

Altogether, the Art and Design students spent over twelve hours researching the theme, planning and delivering the artwork on a large hessian panel measuring 3.5 meters by 2 meters.

This piece of artwork and the similar ones received from other participating schools and colleges across the country were displayed in public-facing areas at the festival venue in Pilton, Somerset.

The project, under the supervision of RuTC Art and Design Teacher Toby Rye, provided 17 Level 2 students a chance to explore and invigorate their imagination relating to a global crisis and display it using creative means to evince the attention of the people to ensure awareness.

Toby is hugely proud of the dedication and creative flair shown on this project, explaining, “This work experience project has been extremely beneficial for all the students involved. Having to work for a client to a strict brief and deadline was a first-time experience for some of them, but one that is vital, as this is the reality of the world of work.

“The theme for the banner was Climate Justice which students collaboratively tackled by designing the world shackled by the chains of heat and global warming. The background references stained glass windows which symbolize light and hope for the future.

“I am immensely proud of my students and watching the TV footage of this giant banner at Glastonbury Festival was incredible.”

Check out some photos of the banner and the students who collaborated together to make it, below.