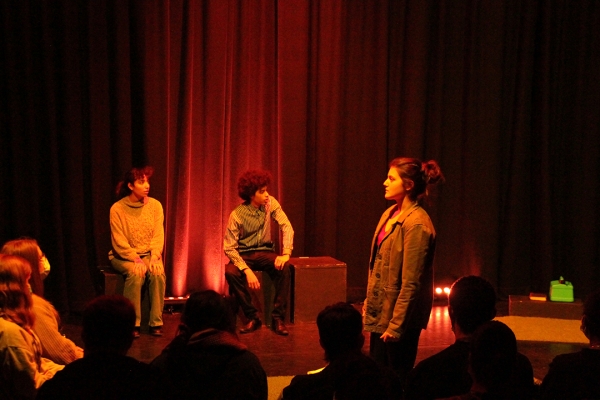 The play, which had won the Judges' Award in the 2015 Bruntwood Prize for best Playwriting, was a resounding success at both the afternoon and evening performance in the College’s new 160 seater auditorium.

‘Parliament Square’ presents the story of Kat, a young woman who tests how far she is willing to go for what she believes in. She wakes up one morning and travels to London, in order to carry out an act of self-immolation. The play questions the extent to which, if any one individual can effect

Jane Swift, performing arts teacher at RuTC, explains “This play was really quite hard-hitting for me, I found the act of self-immolation just unimaginable... my students however relished the opportunity to get involved with something so delicate.

I am absolutely thrilled at the turnout for both performances, it was great for the students to perform to such an engaged audience – we cannot wait for our next performance.”

There were two performances of the play that took place on the 18 January, both showings boasted a full and enthralled audience who greatly enjoyed the play.

Find out more about studying Performing Arts at RuTC

Check out the Gallery below for some photos of the production.