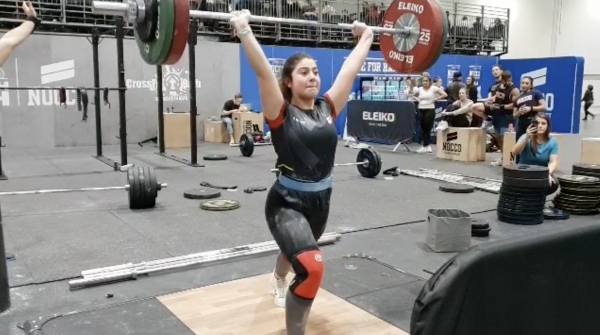 Isabella (Bella) Brown, A Level student at Richmond upon Thames College (RuTC), is a rising star in the weightlifting world and on track to one day compete at the Commonwealth Games and Olympics.

From a young age, Bella was a gymnast and competed nationally and internationally. After ten years, she decided to move over to CrossFit, a high intensity sport incorporating cardio, weightlifting and gymnastics. Her coach recommended to practise Olympic weightlifting alongside CrossFit to better her performance within the sport, however after about six months, Bella decided to shift to weightlifting full time. At her first competition in September 2019, she immediately broke a British record.

Since then, Bella has competed at various other competitions all around the country, continuing breaking records, including records in Snatch, Clean & Jerk and Total within her age group. In addition, she is a British Champion and top ranked U17 female regardless of weight class. Bella has some exciting opportunities coming up this year, including competitions in Singapore and Uzbekistan. Bella says, “Moving onto the next few years, I hope to attend multiple international competitions, Commonwealth Games and Olympics and be a medal contender.”

Currently, Bella is training and competing with the team from Brunel University, which British Weightlifting put her in touch with after she contacted them to get into the sport. About her choice to study A Levels English Literature, History and Politics at RuTC, Bella says, “I am not very interested in sports generally, so I set myself up for a career unrelated to my sport. I feel this will make my performance in the sport as well as my career better as I can fully focus on either work or training. Weightlifting isn’t a lifelong career, so I wanted something completely unrelated when I would leave the sport one day.”

RuTC supports Bella in her weightlifting competitions. Even though there are some challenges for Bella to balance training and college work, her teachers discussed her timetable extensively with her to allow time for her training. Bella knows how every week looks like and plans all her work in advance.

Helen Upfield, Head of Sixth Form at RuTC, says, “We have all been really impressed with the way in which Bella has manged to balance first year study of academic A Levels with her training and commitment to her sport. In class, she is always punctual, well organised and enthusiastic as well as being very modest about her 'other life' weightlifting. We wish her all the best in her competitions.”