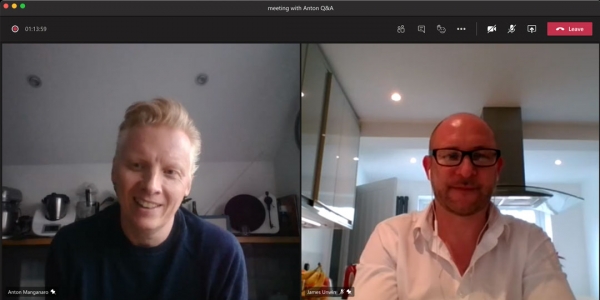 In February, the Head Chef of BAFTA Piccadilly, Anton Manganaro, visited Richmond upon Thames College’s (RuTC) Catering students for a virtual Q&A session. The British Academy of Film and Television (BAFTA) is a world-leading independent arts charity, hosting award ceremonies throughout the year as well as workshops, scholarships and mentoring schemes.

Anton joined BAFTA Piccadilly in 2006, around the time when he met James Unwin, RuTC Head of School for Business and Service Industries, and Neal Hook, RuTC Catering Lecturer. Since then, Anton has visited the College’s Catering students several times to pass on his skills, knowledge and experiences. Anton started his career at the Royal Garden Hotel in Kensington and has since worked with a number of well known chefs. Before heading up the kitchen at BAFTA Piccadilly, he was a private chef.

RuTC Catering students had many questions about the industry, asking everything from getting hired to making it all the way to Head Chef. Anton highlighted the importance of punctuality, reliability and hygiene as well as a positive attitude, which are key qualities when he hires someone. He also stressed how education, such as a college qualification or university degree, go hand in hand with industry experience – providing both basic knowledge and insight on applying that that knowledge in a variety of ways. He also recommends that anyone leaving a job always tries to leave on a positive note, as this helps when moving onto the next position.

When it came to talking about Anton’s experiences working at BAFTA, he mentioned the challenges of adapting a dish to the mass number of people he is cooking for, keeping resources local and considering that it is served in the night after long hours of sitting, so must be kept light. His most challenging dish for a BAFTA award ceremony was a vegan themed menu.

In addition, students were curious about how the Head Chef’s business and personal life changed due to the pandemic. Having staff furloughed offered various possibilities, for example supporting friends’ businesses, however later in the pandemic redundancies followed and little revenue, especially due to cancelled events. At home, to keep his family entertained, Anton recreated takeaway dishes, such as curry, a variety of other Asian dishes and sourdough pizza, which has become a weekly occurrence.

Students also asked about what inspired some of Anton’s restaurant dishes. As he is an Irish Italian born Londoner, inspirations included his mother’s pasta Bolognese, his grandmother’s Irish stew as well as his wife’s Polish influence in putting Bigos on the menu.

James Unwin, Head of School for Business and Service Industries, said, “Anton has worked with Richmond upon Thames College since 2012 and has provided hundreds of students with opportunities to develop their skills and understating in the hospitality industry. Due to Covid, students have been unable to participate with work placements, however, Anton has continually provided support to all our students.

“The most recent Q&A session provided students with an opportunity to ask Anton about his personal experiences in the industry and what makes a successful chef. Anton spoke openly and honestly about his personal challenges and goals, particularly around the impact of Covid on the catering and hospitality industry. This enabled students to understand the challenges they currently face but also provided encouragement to use this time to continually develop their skills, confidence and aspirations.”