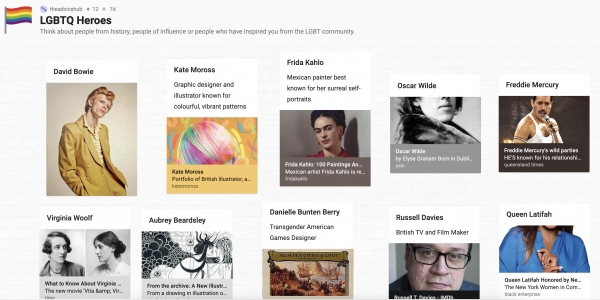 February celebrates LGBTQ History Month in the UK and to mark the occasion, Richmond upon Thames College (RuTC) organised a number of activities.

Over the whole month, RuTC staff and students participated in tutorials, getting to know more about LGBTQ history. In addition, the College’s Equality and Diversity Committee asked staff and students to contribute towards a collaboration of LGBTQ heroes online, adding historical, influential and inspirational figures from the LGBTQ community. Students and staff added over 50 of their heroes including singers David Bowie and Queen Latifah, current and former Olympic athletes Tom Daley and Caitlyn Jenner, actors Sir Ian McKellen and Laverne Cox as well as many others.

RuTC student K'ja said, "I loved the tutorial, it was really informative and taught me a lot about the past. It also made me think of things I had never thought of before and how I can try to enforce change. It started an important conversation that I think a lot of people need to have and talk about, especially young people." Emma, another RuTC student, commented on how this was the first time she has been educated about the terminology of the LGBTQ community having not been familiar with the terms queer and non-binary before the session.

Gordon Chin-Martin, Creative Media lecturer at RuTC, said, "Learners were especially engaged in the difference between labels and self-identity. It was a topic everyone had a view about and they could relate to it on a personal level as well as class-wide."

All icons of the LGBTQ Heroes wall will be consolidated to make one amazing resource which will be kept alongside the College’s new LGBTQ toolkit. This will include an LGBTQ UK history timeline, tutorial activities and slides, a glossary of terms associated with LGBTQ and a transgender guide for staff and students. The toolkit for staff and student is part of a bigger project for RuTC’s Equality and Diversity Committee, reinvigorating and revitalising the College’s commitment to promoting Equality and Diversity within the community.

Cait Orton, Safeguarding Team Leader at RuTC, said "The toolkit has important and helpful information for both staff and students designed to inform and educate about LGBTQ history, equality and inclusivity. I would recommend that everyone has a look at the timeline tool and watches the videos included in the toolkit to understand why LGBTQ History Month is still so important."

Marc Dodi, Head of Creative Industries and Chair of Equality and Diversity Committee at RuTC, said, "Since the welcome abolition of Section 28 in 2003, the development of raising LGBTQ awareness in schools and colleges has increased the confidence of staff and students in being open to dialogue about sexuality and gender identity. Conversations and discussions about LGBTQ history help educate and celebrate the achievements made by less recognised queer figures in society. I look forward to welcoming a day where bullying someone for their sexuality or gender identity is a thing of the past. This toolkit is just the start of several strategies at RuTC for stamping out hate and celebrating the diversity of our communities within it."

Have a look at the amazing LGBTQ Heroes our students and staff added: