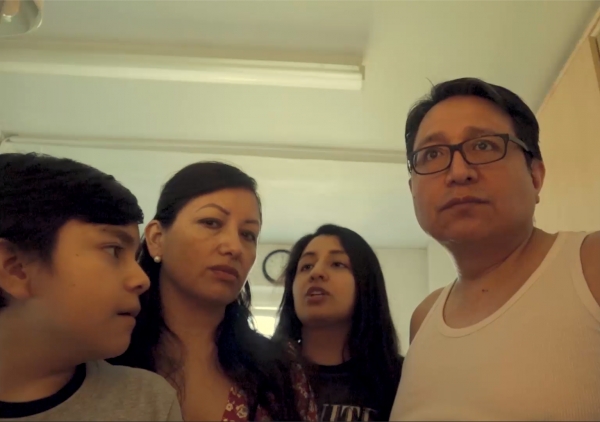 During the COVID-19 lockdown, staff and students at Richmond upon Thames College (RuTC) have quickly evolved to remote teaching and learning. Over the past few weeks the college has seen some truly inspirational examples of this, including Media student Oscar Aron Minango, who adapted his original final project script to a highly relatable short film called 'Quarantine 2020'.

The short satirical film depicts the challenges that people all over the world are facing right now, due to the global coronavirus pandemic. Being in lockdown, Oscar filmed the production at home with his family as the stars, which gives the film a really personable approach. He uses comedic aspects to create a light-hearted, heart-warming film that we can all relate to during this time.

Oscar, who studies Creative Media Production and Technology (Moving Image) Level 3, said, “I had trouble thinking of a comedy idea inside my home, but I then thought of what was currently happening in today’s world, COVID-19. This this is a serious problem and has affected many people but then I thought if there could be some sort of comedy or positivity about. You can tell that there are problems in the house such as food shortage and boredom. What occurs in this short film is quite sad, but I brought comedy into it, so it changes the whole mood and perspective on this virus.”

The opening of Oscar’s short film is the announcement of the Prime Minister to stay at home, followed by the consequences this had on a family. Oscar created an entire shot list and script before filming and editing it.

Matthew Chattle, Media lecturer at RuTC, said, “Students were originally working on the final major projects and had been since mid-January. The lockdown meant that students couldn’t finish their final major project as this would have involved filming and photographing outside. We have encouraged students to carry on working – either to finish their project if they could or to do something based around the lockdown experience, and Oscar had decided to use his time at home to make his film. I didn't know he had been doing this, so it was a great surprise to see it.”

Have a look at Oscar’s short movie below and find out more about studying Media at RuTC.