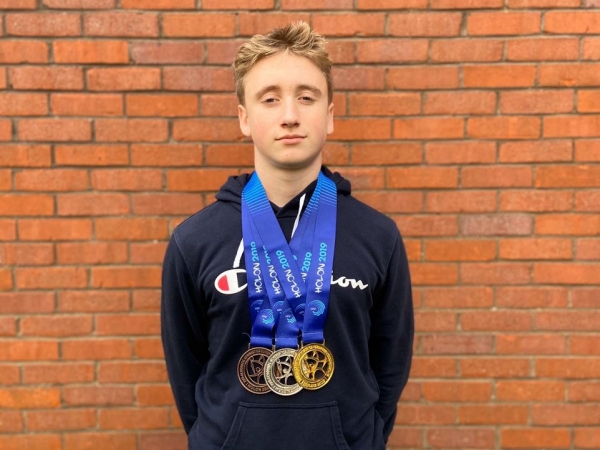 Richmond upon Thames College (RuTC) Sport Level 3 student Andrew Morris-Hunt won bronze, silver and gold for his acrobatic routines at the 2019 European Acrobatics Championship which took place from 30 October to 3 November in Israel.

Andrew is part of Great Britain’s acrobatic gymnastics team. Unlike traditional gymnastics, which involves various apparatuses, acrobatic gymnasts train in partnerships, using each other to hold their balance and complete dynamic moves. Andrew and his Junior Men’s Group won silver for balance, bronze for their all-around performance and claimed gold for their dynamic routine.

In addition to studying Sports at RuTC, for the past ten years Andrew has trained more than 20 hours every week at Spelthorne Gymnastics. This was not his first time participating in the European Acrobatics Championship and he has also already competed internationally.

Andrew’s Sport teacher at RuTC, Sam Nicoll, said, “Andrew is an able and well-motivated student. He works hard and effectively to deal with practical and theoretical concepts. Andrew really is a sport enthusiast, regularly participating in additional training sessions so he excels in his chosen sport and consistently makes positive and critical contributions in class. He is a dedicated team player which is evident at the European Acrobatics Championship.”

Have a look at the team's performances below!