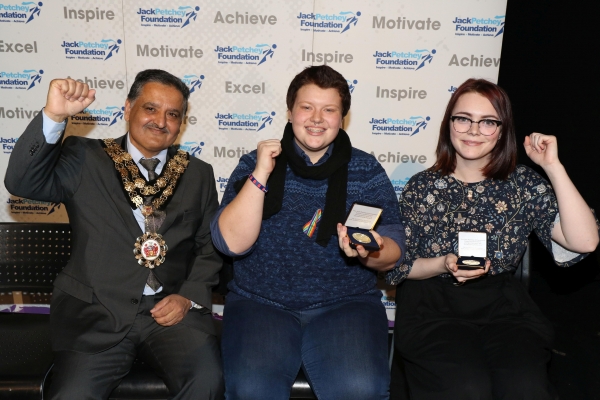 On Wednesday 21 November, three Richmond upon Thames College (RuTC) students each won a Jack Petchey Award at the annual ceremony held at The Rose Theatre in Kingston upon Thames. The Jack Petchey award initiative recognises outstanding young people between the ages of 11-25 throughout London and Essex and allows students and staff to celebrate their efforts, endeavours and achievements. The winners were presented with the awards by the Mayor of the London Borough of Richmond Cllr Ben Khosa (pictured above, left).

“We do it because we want to help young people raise their aspirations, believe in themselves and make a contribution to their society” said Sir Jack Petchey CBE.

Ben Hamilton, former RuTC Media student, won the autumn term award for showing dedication and commitment to his course despite challenging personal circumstances. He was a great role model to his classmates, received the highest final grade of D* and is now studying at Portsmouth university for a degree.

RuTC A Level student Bethannie York (pictured above, right) won the spring term award in recognition of her work with the Hounslow Young Carers association where she mentors younger children. Bethannie is involved in many community projects and represents her peers at meeting such as the local Youth Council and at consultations with the Local Safeguarding Children’s Board.

Isaac Skrzypczyk (pictured above, middle) won the summer term award due to his contribution to the college community. Isaac studies A Levels at RuTC, is the Students’ Union equality and diversity officer and participates in various enrichment groups. In addition, he campaigns for equality and human rights issues and is a great student leader.

Cait Orton, Safeguarding and Equalities Officer at RuTC, said: “This event is a celebration of our students who have won the Jack Petchey Award in the previous academic year, and is an important and vital part of the Award Scheme which helps us to celebrate the achievement of our students.”

Find out more about RuTC students who were given this award in 2017!