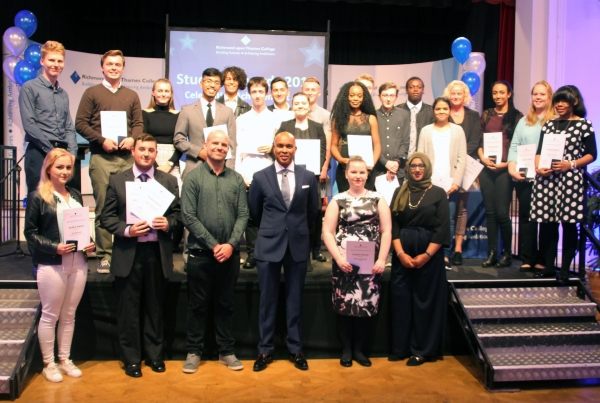 On Thursday 7th September, Richmond upon Thames College (RuTC) celebrated the exceptional achievements of some its students at the annual awards ceremony at York House in Twickenham.

Around 130 guests attended the ceremony including students, parents, staff and members of the local community such as Twickenham’s MP Sir Vince Cable and the Mayor of Richmond upon Thames, Councillor Lisa Blakemore. Before the awards began, guests were served canapés and drinks by RuTC catering students while they enjoyed looking at displays of work by students on Construction Crafts and Visual Arts courses.

CEO and Principal of RuTC, Robin Ghurbhurun, hosted the awards alongside RuTC alumni member and founder of animation studio Blue Zoo, Tom Box, who spoke to the students about his journey since leaving the college in 1997. His advice to the students was to “work hard and do things outside of your comfort zone in order to succeed.”

25 awards were given to students who were nominated by staff members and fellow students for their outstanding achievements from the last academic year. These included the Award for Construction Crafts which was won by Will Whitmore who is progressing on to the Level 3 Bench Joinery course at RuTC, the Award for Apprenticeships which was won by Jodie Head who is starting the next level of her Chartered Institute of Personal Development Diploma in September, the Award for Media which was won by Lesandra Salmon who is going to Arts University Bournemouth to study Film Production, and the Students’ Choice Award won by Gabriela Kozlowska who is going to University of the Arts London to study a degree in Graphics Branding and Identity.

RuTC student Rory Walsh was presented the Principal's Award for Exceptional Student of the Year for his selfless and humbling actions whilst helping the victims of the Grenfell Tower incident the night before his A Level English Language and Literature exam.

CEO and Principal of RuTC, Robin Ghurbhurun, commented “this year’s Student Awards ceremony was a spectacular evening that gave the college an opportunity to recognise the outstanding achievements of our students. It was great to see so many guests celebrating what has been a fantastic year. We wish all of the students leaving us this year the very best of luck for the future.”

RuTC proudly boasts the best results on all programmes in over 6 years, placing RuTC as one of the top colleges in the country.

Marcus managed the demands of having to complete a two year Further Maths A Level course in one year by taking responsibility for his learning and self-studying the missed modules. Marcus is incredibly motivated and is universally liked by his teachers who say he has an astute mind and excellent organisational skills.

Isabel has a natural flare for critical thinking and has confidently mastered the ability to ‘think like a geographer’. At AS level Isabel scored 194 marks out of 200 in her exam after producing comprehensive revision notes on the topics. Isabel is described as a positive, trustworthy and well-liked person who contributes towards a positive atmosphere in class.

Award for Computing and IT: Radostina Staykova

Radostina is a selfless and motivated student who has an incredible attitude to both her work and college life. Radostina represents herself and her group effectively and her hard work is reflected in her high achievements across all units. She is described by staff members as a pleasure to teach.

Award for Construction Crafts: Will Whitmore

Will is a dedicated and supportive student who has fully embraced college life and with his work in his Bench Joinery lessons and his role as the Estates Officer in the Students’ Union and as a Student Governor. Will recently entered the Carpenters Craft Competition run by the Institute of Carpenters where he came 2nd place in the regional finals.

The hard work, outstanding behaviour and effort shown by Hashim has proved his passion and dedication for Mechanical Engineering. Hashim is supportive to his fellow students who listen to his advice, opinion and ideas and consider him one of the best in their group. Hashim achieved an incredible triple Distinction starred.

Riccardo is an outstanding student who produces extremely high quality work. His great character helps to create positive and encouraging classroom experiences for his peers and his teachers alike. Riccardo has a very dedicated attitude to his work and always takes the time to ensure things are done to the very best of his ability.

Hamish has been consistently hardworking and enthusiastic during his two years of studying Travel and Tourism. His teachers believe he has been an asset to the class as he is always willing to share his opinions and support his classmates. Hamish has represented his class well in his role as Student Representative.

Renelle is an exceptional student and a real asset to the catering department. She is someone who sets herself very high standards both in the kitchen and in front of house and her commitment and passion is second-to-none. Renelle is a great team player and has the potential to become an excellent all-round chef.

Sara has proved herself to be a highly motivated and enthusiastic learner who has taken advantage of every opportunity to grow as an individual and maximise her success. Sara has fully grasped important analytical skills required for higher education study which will help her as she progresses in the future.

Sam has been an exceptional student over the past two years and has shown a clear understanding of both Philosophy and Politics. Sam encourages other class members to join in on discussions and contribute to the lessons which improves and energises the class dynamics.

Jodie is a keen contributor to class discussion who always wants to better her understanding of the subject. Jodie has a real drive and dedication towards success and is someone who always has a positive attitude and willingness to learn. She is a valuable member of any class and works well with her classmates.

Delfina is a mature and sensible young woman who has great tenacity and has shown a steely determination towards achieving her goals. She enjoys all aspects of Spanish, from grammar to literature and cultural topics. Her written work is always of high quality intelligent and engaging.

Ella is a wonderful student who is hardworking, curious and always strive to improve. Her academic skills are described as undergraduate standard, with an impressive and sophisticated level of insight. Ella is generous, patient and always shares her time and ideas with her peers.

Janelle is described as the backbone of her class, an incredibly motivated, mature and independent student. Janelle always submitted her coursework early in case anything needed to be amended. As well as excelling in class, Janelle has been to a variety of advert auditions to gain experience in the acting industry.

Lesandra is both reliable and consistent with her work ethic and has become increasingly confident and determined. She has taken a professional and dedicated approach to her Moving Image specialism and has shown great effort and desire in developing her technical skills in video production.

Alina has demonstrated clear dedication and enthusiasm for her art and design course by always questioning and pursuing new ways of developing her work. Alina has been consistently good at producing independent work which has enabled her to move forward and gain fresh insight and guidance.

Querida’s work has always been of an extremely high standard and this is down to her hard working nature. She is a model student who is polite and helpful to all of her colleagues. Querida stands out as a student who behaves in a professional manner and who is determined to succeed.

Jodie is described as motivated, hard-working, incredibly well organised and good fun. She has completed her apprenticeship in the HR department at the National Physical Laboratory in Teddington to an exceptionally high standard and has now been appointed as the HR Administrator.

James in an exceptional student who is focused, hardworking and has shown great commitment to learning. He is very supportive of his peers and always puts others first. James has grown in confidence during his time at RuTC and has recently completed a successful placement at Tesco.

Award for Adult and HE: Debbie Todd

Debbie has worked very hard throughout her HNC Graphic Communications course. She has strived to refine her design to a professional standard, creating final pieces that are original and unique as well as aesthetically pleasing. She has also confidently presented excellent work in two pitches to Haymarket Media Group.

Award for Team of the Year: The Students' Union and Governors

Over the past year the Student Union and Student Governors have worked with exceptional dedication, professionalism and efficiency to represent their fellow students. Together they have facilitated various Learner Voice opportunities, and engaged with developing their roles and networking opportunities.

Award for the Greatest Contribution to College Life: Muminah Rasul

Muminah held the position of Students’ Union President from March 2016 to March 2017 where she proved herself an outstanding leader and professional. She is a calm, diplomatic, determined and organised student who is passionate about achieving the very best for her peers.

Sam’s dedication and work ethic to his subjects has inspired and motivated his peers this has enabled Sam to not only contribute to class discussions, but to help others gain the confidence to speak out too, which has helped to create a well-balanced class atmosphere and positive and meaningful classroom sessions.

Gabriela has contributed a lot to the college over the past two years, both educationally and socially. She has helped her fellow students to adjust to college life and made sure everyone felt safe and comfortable at college. Gabriela is an incredibly hardworking student with great ambitions.

Principal's Award for Exceptional Student of the Year: Rory Walsh

Rory, who lives close to Grenfell Tower, woke up at around 1.30am on the night of the incident and his immediate thought was to help. He volunteered at the local Maxilla Social Club from around 2am until 8am the same day, despite having his A Level English Language and Literature exam that morning.