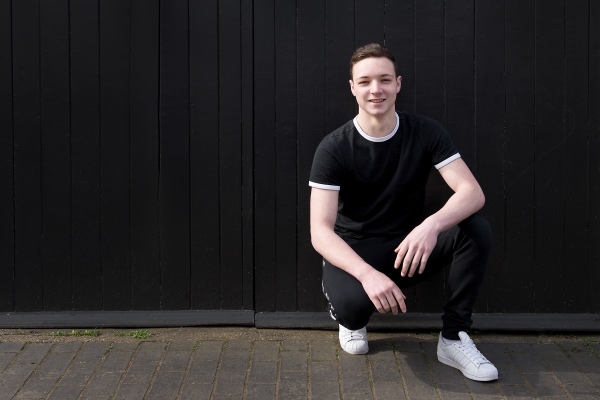 In the last year, Callum has won a gold medal competing for Team GB in the Acrobatics Gymnastics World Age Group Competition in China and has been awarded a scholarship for the Italia Conti Arts Centre in Surrey to study a three year diploma in Performing Arts.

Having never done a dance class before RuTC, Callum has worked incredibly hard to receive his scholarship.

How did you get into gymnastics?

I first started gymnastics when I was only two-years-old. The National Coach at Heathrow Gymnastics Club scouted me when I was about six. His role is to bring people into the club that have potential in the sport.

Describe your experience of being a part of Team GB

I think to be walking around with Team GB on your back is a privilege in itself no matter what sport you are doing. Being a part of Team GB was a lifetime goal that I strived to achieve for a long time.

Can you tell us about your achievement at last year’s competition?

I won the gold medal at last year’s Acrobatics Gymnastics World Age Group Competition (2016). I was thrilled to have achieved the highest score of the competition and receive the top medal.

I did my audition for Italia Conti Arts Centre in February and if I’m really honest at the beginning I didn’t want to go. I am more a gymnast then I am a dancer so I was quite intimidated by the thought of the audition. But I gave it my best shot as I always do and two weeks later I received a letter through the post - a three year 100% scholarship – the cherry on the cake it couldn’t have worked out better.

What is your future ambition?

Coming here to RuTC has really given me an insight to what dance is all about. The staff and facilities at the college have absolutely encouraged me and pushed me so I’m definitely going to keep striving for more gold medals and continue dancing.

What advice would you give to someone looking to start a career in dance or gymnastics?

It is a lifestyle, it’s something that you have to be 100% with. You will eat, sleep and breathe dance or gym. It is very full on and intense but that’s what being the best is all about.

Want to study dance at RuTC? Find out more.