We are delighted to announce that Malachi Kirby, a former Performing Arts student of RuTC, won a BAFTA award for Best Supporting Actor for his role in Small Axe.

Malachi played the role of Darcus Howe in Mangrove, the first installment of films from the Small Axe series. Mangrove is based on the true story of the Mangrove Nine, a group of Black Activists who had clashed with police during a protest march in Notting Hill in 1970.

Previous to this, he has had appearances in Eastenders , Roots Doctor Who and Black Mirror.

Richmond-upon-Thames College is extremely proud of the achievement of our former student and Malachi’s personal tutor Jane Swift at the college spoke of her delight on his win - “I’m ecstatic because of how hard he worked, to be able to get work acting consistently and always looking to build on his career.”

Jane said she was “really proud to see him getting the recognition that he deserved.”

She remembers him being a “shy, quiet student but never missed a day. He carried on grafting every day, learning a wide range of acting techniques and styles of performance because he all he wanted to do was be an actor.” 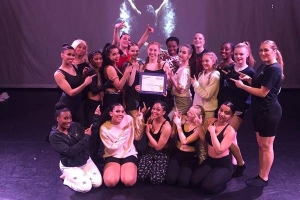 The Jack Petchey Achievement Award Scheme recognises the positive contributions, efforts and endeavors of young people aged 11-25 across London and Essex. These achievements include being a great role model, volunteering, overcoming personal challenges and supporting others over and above expectations. For the Award, the winner will receive a £250 grant, which can be used for anything that will benefit their class.

Each term, outstanding RuTC students are nominated by their classmates for a Jack Petchey Award and this week Georgia received the award for her contributions and commitment to her course.

Georgia’s tutor Hannah Fryer said "Georgia has been unwavering in her commitment to her dance studies this year. She has worked hard to overcome her own challenges, always ready to receive feedback from both her peers and tutors alike. She is always incredibly kind and helpful to her fellow dancers and is an incredibly worthy winner."

Find out more about Dance courses by clicking here.