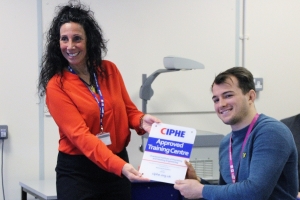 During January and February, HIP magazine travelled across seven regions of the UK. The winner of each regional heat and the highest runner-up overall scorer went on to the grand finale. Jake was nominated for the competition by lecturer, Daniel Richards, and came second at the regional heat, which took place at West Herts College. He was given a technical drawing to complete in a set time, during which he installed copper pipework to a boiler and a shower.

In addition to this great success, CIPHE visited RuTC on Tuesday 26 February, presenting the college with its Approved Training Centre Plaque. CIPHE was established in 1906 and is the professional body for UK’s plumbing and heating industry.

CIPHE’s National President, Tracey Richardson, and Technical Manager, Jerry Whiteley, talked to RuTC’s Plumbing students of various levels. They stressed the importance of learning as much as possible in college to be prepared when going into the workplace, how the future of plumbing will change due to renewable energy and were pleased to hear how much pride our students take in the work they do and skills they learn.

Daniel Richards, RuTC Construction lecturer, said: “It takes pride and passion in what you do and hard work to achieve perfect results. Jake demonstrated this at the competition, showing how much his plumbing skills progressed both in college and his workplace over the last six months. Being now also presented with the Approved Training Centre Plaque by the CIPHE is a great honour and the collaboration with the institute will benefit our students in the future. The award and plaque are a statement for the quality of plumbing courses taught at RuTC.” 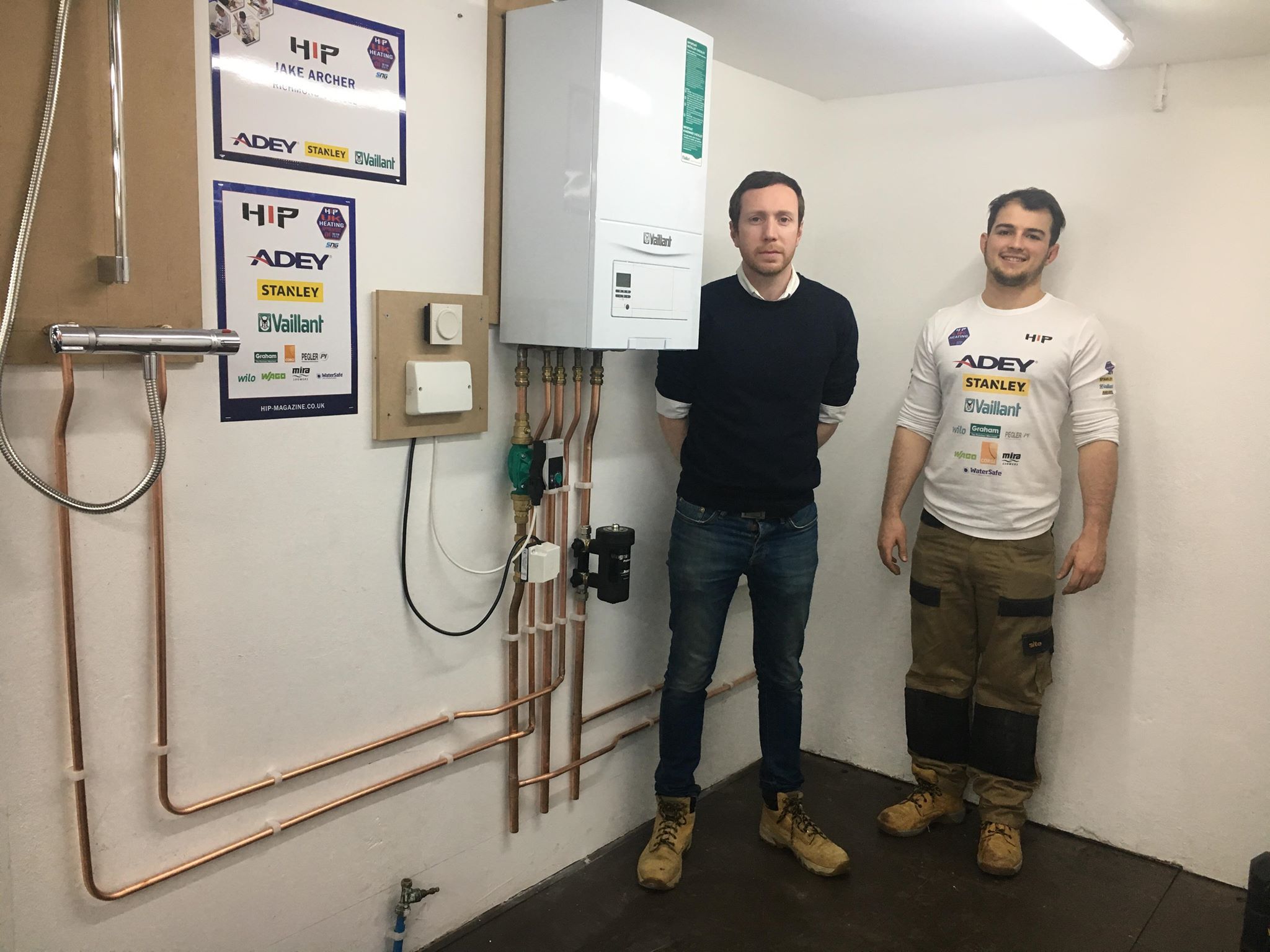 RuTC student Jake Archer and his teacher Daniel Richards at the HIP UK Heating Apprentice of the Year 2019 competition. 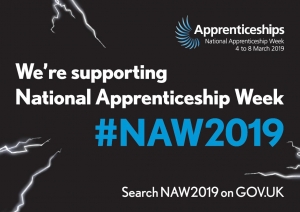 From Monday 4 to Friday 8 March, Richmond upon Thames College (RuTC) will be celebrating the 12th annual National Apprenticeship Week. This week highlights how employers and individuals can benefit from apprenticeships.

Throughout the week, RuTC’s apprentices and employer engagement team will talk to current students about the benefits of apprenticeships and will participate in the World of Work careers event at Harlequins on Wednesday 6 March. The college will also host an employer breakfast on Thursday 7 March.

Anna Dobbin, Employer Engagement and Apprenticeship Levy Advisor at RuTC, said: “We are very excited for this year’s National Apprenticeship Week, especially since our college’s apprentices were involved in planning activities for the week. We hope that this week will encourage many of our current and prospective students to take up an apprenticeship.”

Find out more about doing an apprenticeship at RuTC! 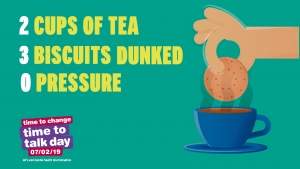 On Thursday 7 February, Richmond upon Thames College (RuTC) hosted events to celebrate Time to Talk Day 2019. This day encourages everyone to make conversation about mental health in every possible way.

RuTC understands that talking about mental health is not always easy, however starting a conversation does not have to be difficult. Being there for someone can make a significant difference, which is why our Welfare Hub invited students for tea, biscuits and a chat during lunchtime to encourage conversation about mental health. However, these conversations should not only take place on Time to Talk Day but every day.

Dezrika Ramsey, Welfare and Engagement Advisor at RuTC, said: “We just started by asking ‘How are you?’ and really meaning it. We had many students coming in who were thankful for the opportunity to not only drop in between classes, but having a designated time and place to have a meaningful chat. From now on we will make this a weekly occasion during lunchtime.”

In addition, our Acting UAL Level 3 students performed a verbatim theatre piece on mental health for one of their assessments, which coincided with Time to Talk Day 2019.

Visit our Welfare Hub online or in person (room C12) for more information! The 45 Day Industry Placement scheme is a government pilot where students can experience working life, understand how they can apply the skills they learnt in college and boost their CV. This scheme is part of the larger T Level programme.

Two RuTC students are reaching the end of their 45 day placement and have received outstanding feedback for their work from their placement employer. Jack Smith and Connor Smith, both Level 2 Plumbing Diploma students at RuTC, carried out their 45 Day Industry Placement at Registered Gas Services (RGS) in Hounslow. RGS had great feedback for Jack and Connor, stressing their excellent timekeeping, willingness to learn and aptitude to work. In addition, the students’ communication not only with colleagues and managers but also with customers was highly valued.

Jack said: “I have learnt valuable skills at RGS, and as a result of what they have taught me I’m more confident as a training plumber. The placement has helped me put into practice skills I learnt at college like bending lengths of copper pipe and soldering a fitting to ensure there won’t be any leaks, so the basics are now second nature to me.”

Connor added: “My time with RGS so far has been amazing, I have learnt so much over my duration here. I have met a fantastic bunch of people who have been going out of their way to teach me the basics and more and help me develop my knowledge and skills on plumbing and electrics. RGS has put a lot of trust in me and my time here so far has been career changing.”

Peter Davidson, Director at RSG, said: “The 45 day placement is working really well for us at RGS. Jack and Connor are working alongside our engineers, learning new skills and strengthening our team. They fit right in with the team and help out with all aspects of our work. The scheme is a great way to develop the workforce and give possible future employees a try.” 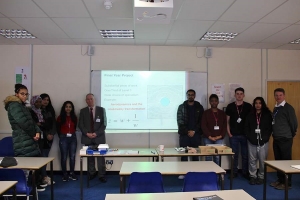 On Thursday 31 January, Dr Simon Shaw from Brunel University visited our Maths A Level students. Through his talk, Dr Shaw made RuTC students aware of the advantages of studying maths at university in terms of career prospects and potential earnings. He emphasised how those studying maths belong to a highly valued minority group in society.

Students got to know the different maths programmes offered at Brunel University as well as the option to do a one year work placement during their studies, which increases employability and life skills. However, Dr Shaw not only showed why Brunel University is a great choice for studying Maths, but also stressed how important it is for the students to find the right university for themselves.

In addition to his talk, Dr Shaw gave various thought-provoking puzzles to our students and demonstrated how omnipresent maths is in everyday life – from the technology used in mobile phones to the theory behind aeronautics.

Elizabeth Orji-Smith, Maths A Level student at RuTC, said: “Dr Shaw’s talk was very engaging, informative and relevant – not only for studying at Brunel University, but maths in general. It really made clear the importance of how maths is used in society. It has encouraged me to continue studying this subject and will help me put time into my research when it comes to choosing a university.”

Find out more about studying Maths at RuTC! 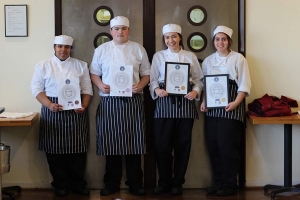 On 22 and 23 January 2019, four of Richmond upon Thames College’s (RuTC) catering students participated in the annual chef competition Salon Culinaire in Birmingham and won two times gold as well as one bronze medal and one merit. The competition took place alongside The Foodservice Show and The Professional Kitchen Show and was the UK’s biggest and most esteemed chef competition of the year. Almost 400 chefs competed in 70 competitions.

Every year, RuTC catering students participate successfully at Salon Culinaire, demonstrating their skills in front of a live audience of judges and food professionals. This year, RuTC Professional Cookery NVQ Level 1 students were awarded medals for their outstanding efforts. Jake Gibbons received a Merit in the Junior Lamb competition and Arany Yogeswaran won a bronze medal for her Knife Skills, showcasing Julienne and Jardinere cuts on various vegetables.

RuTC Professional Cookery NVQ Diploma Level 2 students Leise Meale and Amy Waite, who are both 17 years old, competed in senior classes against experienced chefs. Leise received a gold medal for her highly skilled techniques in butchering a whole chicken. Whilst competing against established chefs from across the globe, Amy produced two gold medal winning individual starters in 30 minutes for the Avocado Starter competition.

James Unwin, Catering & Hospitality Curriculum Manager at RuTC, said: “The Salon Culinaire competition was a highly successful and rewarding experience for everyone. Both students and staff represented the college and demonstrated the continued high standards, skills and commitment we have at RuTC.”

Find out more about studying Catering at RuTC!