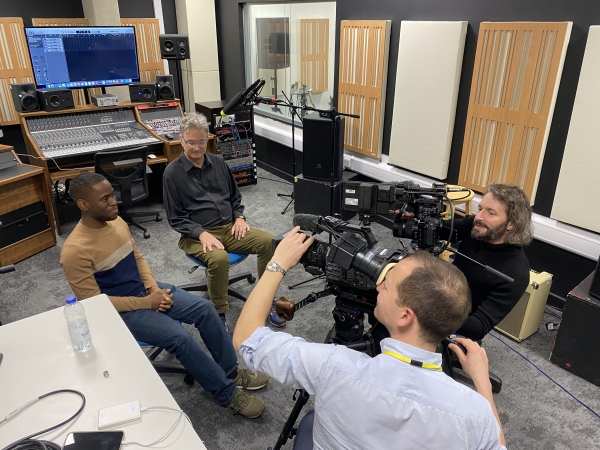 In November, a documentary film crew from Japan arrived at Richmond upon Thames College (RuTC) to film and interview alumnus music student, Michael Howell, and current music student, Okan Kosanoglu, for a documentary ‘Who I Am Life’ which looks at Michael’s life and career.

‘Who I Am Life’ is a documentary series looking at a diverse line up of artists, musicians, creators who are actively involved in the entertainment world. The show started in 2016, portraying outstanding athletes with physical or mental disability / divergence.

Since then, it has grown in popularity and in the lead-up to the Paralympics in Tokyo in 2021 it received multiple international awards.

This year's new season builds on the original series in expanding its ambit from athletes to notable personalities from other spheres of society and culture.

The series will take an in-depth look at the life of three individuals, from around the world, including bionic pop artist Victoria Modesta, deaf and transgender artist Chela Mann and RuTC alumni, autistic music composer, Michael Howell.

Michael studied Performing Arts Level 3 diploma at Richmond upon Thames College (RuTC) and during his time at the college featured in an extensive article on the BBC website, BBC London News and the ‘i’ national newspaper.

Michael, who has high functioning autism, is an incredibly talented musician who is able to create symphonies in his head. From 11, Micheal has taught himself composing by

listening to classical music and opera on YouTube and from this can translate the pieces by ear.

Michael attracted public attention in 2017 when he published his piece “Great Is The Grief', as well as featuring in the BBC series "Amazing Humans."

Michael is delighted and honoured to have a documentary dedicated to his life so far and career, explaining “My experience working with an international broadcasting company, Wowow, Japan has been an invaluable and enjoyable period of my career.

It has given me the opportunity to show to the world who I am, as a person and musician. I hope to inspire and raise awareness, being a black autistic classical composer and musician.”

The synopsis of the documentary is summarised by Hubert Hunger (Director); “We meet Michael Howell at a crucial stage of his life. About to graduate, he is set to launch his career as a composer in earnest.

“Starting with his final days as an undergraduate student, the program will introduce Michael and his life on campus, including teaching sessions, singing lessons, rehearsals for his upcoming performance of his first ensemble composition, and finally his graduation crowning his four years at Royal Holloway.

“The summer after graduation is a challenging yet promising time. With future projects already on the horizon and others still developing, we follow Michael's budding career.”

The skilled crew from Japan who came to film the documentary on Michael, included director, Herbert Hunger (Editor of BBC Storyville) and cameraman Sam Mitchell, (cinematographer on The Last Man Standing: Suge Knight & the Murders of Biggie & Tupac).

Peter Garvey, Music teacher to both Michael and Okan is delighted to see how well Michael is getting on, gushing “It was heart-warming to see Michael again and to see him still pursuing his highly individual musical style.

“We talked about his time at RUTC, his development and challenges since then and how he can pursue his career.

“The film company are flying Michael out to Japan to perform at the premiere of the documentary, which is great news.”

Whilst filming, Michael and Okan performed their song ‘I Feel So Down’ to much acclaim.

Once filming wrapped, the film crew hosted a Q&A session with interested RuTC Creative Media students which both inspired and intrigued curious students.

The series will air early 2023 in Japan.