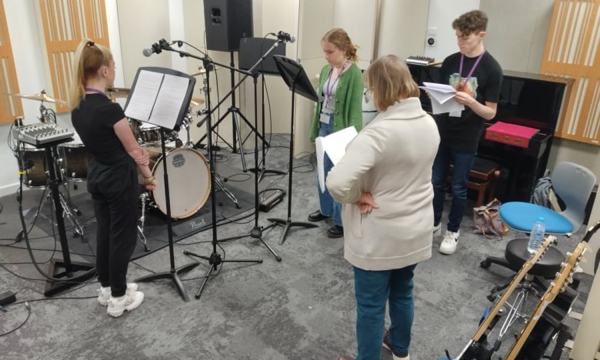 Actress Wendy Allnut, best known for her roles in ‘Oh What a Lovely War’, ‘When Eight Bells Toll’ and ‘Man about the House’, volunteered to help neighbour, Patricia Cammish, with her radio play as the competition deadline was imminent.

Realising they could not produce the play alone to such a tight deadline, Wendy Allnut, sought the assistance of Richmond upon Thames College’s students and staff.

Marius Smuts, Creative Media Production teacher alongside Jane Swift, Performing Arts teacher and Performing Arts Facilitator, Rhys Slyfield, were delighted to be asked to help with such an important project and knew their students would be thrilled to be involved.

Marius explains, “We always welcome opportunities to work alongside our local community here in Richmond, so I knew our students would relish the chance to perform and assist with this production.”

He continues, “Our students did a wonderful job performing and producing the play and enjoyed every second of it. It was lovely to see the community and college pulling together to complete this project in time - I’m really proud of everyone involved.”

The competition by Arts Richmond to write a 15-minute radio-play was arranged in honor and memory of Colin Skipp, who played Tony Archer in the popular BBC radio serial ‘The Archers’.

The four finalists including Patricia Cammish, attended the competition finale on the 7th of November in the Mayor of Richmond’s parlour at York House, Twickenham.

Find out more about our Creative Arts and Media and Performing Arts courses.