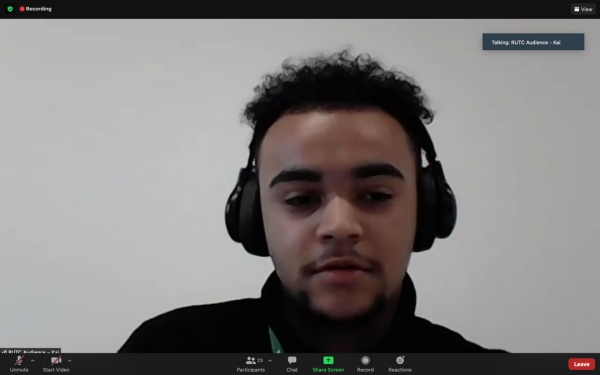 This year, our A Level students took part again in the Debating Matters competition, for the first time ever virtually. In two rounds in November, students debated the topics “humanity should fear advances in artificial intelligence” and “unhealthy lifestyles are not the business of government” against Cirencester College and Sherborne Girls, who went on to the final and became second in the 2020 competition.

Debating Matters is a competition for sixth forms, launched by the Academy of Ideas in 2003 and taken over by the Battle of Ideas charity in 2019, presenting schools with an innovative and engaging approach to debating. RuTC has a long standing history in taking part in the competition, winning the Debating Matters London South Championship in 2018. Our students debated brilliantly, and even though they did not move on to the next round, they found the experience great.

Kai Broadbent, who debated the topic of artificial intelligence, said, “At first, I was really nervous as I had never done anything like this before. However, I knew that I needed to push forward and do it as it would help me become more confident in public speaking, since I want to become a lawyer. As the debate went on, I got really into it and enjoyed taking part as well as preparing all my notes for it. The experience is great and I would definitely do it again.”

Classmate Cindy Igeme added, “My experience with the Debating Matters competition was exciting to say the least, as my first time debating, taking it head-on was an amazing decision. I learned in the moment and got amazing feedback from a variety of judges.”

Nia Videnova, who debated governments involvement in unhealthy lifestyles, said, “Debating Matters is a great experience for every student willing to learn, apply their knowledge and gain a lot of experience. Although this year the debate took place online and, I would say, made it a lot easier for the participants as they didn’t have to talk in front of a public, I really enjoyed it. Although this time our college didn’t win, I am very happy with my team performance, mainly because most of us hadn’t debated before but did our best. I would recommend the Debating Club to every student in our college.”

Find out more about studying A Levels at RuTC.