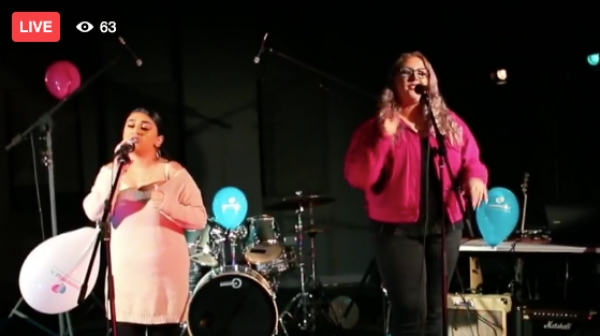 On Wednesday 25 November, Richmond upon Thames College (RuTC) Music students hosted their annual Winter Music Concert, for the first time ever live online on Facebook. As safety guidelines are currently challenging the usual ways of performances, Music students and staff came up with an alternative that made the concert available to a wider audience, who could enjoy the amazing skills of the students from the comfort of their own home.

Every year, students choose a charity to which the proceedings of the concert go to. This year’s choice was Dementia UK, who provide Admiral Nurses for families affected by dementia. Throughout the concert, streamed live on Facebook, informational clips of the charity were included to highlight the amazing work they are doing. As the concert was available to watch for free, an online donation page was set up. Not even halfway through the concert, the target of £100 was reached and by the end, the audience donated the incredible amount of £405.

Dementia UK commented, “This will make such a difference. All the money you’ve raised will help our dementia specialist nurses be a lifeline to families who are struggling to cope with the relentless pressures of caring for a loved one with dementia. Thank you so much. The more money wonderful supporters like you raise, the more nurses we’re able to fund and the more families we can help in their time of need.”

For the Music students, this was a completely new way of showing their skills. Although the feedback from an energetic in person audience was missing, viewers commented throughout the entire concert without pausing. Comments ranged from “an amazing performance” to “that was epic”, “some serious talent here”, “massive respect for the sound team, too” and much more. During the concert, two of the Music students not only sang, but also took over the role of hosts, introducing each musician and act. Music ranged from self-composed spoken words and songs to covers in contemporary pop, rap, 90s and 2000s hits, classical piano pieces and James Bond theme songs.

Music students commented that the concert was a unique experience as it was the first online event they have done without an in person audience. Some were more nervous than they would have been at a normal concert because of the unknown of how many people were watching. However, hosting a concert in this way enabled them to re-watch their performance which students found a positive benefit.

Peter Garvey, Performing Arts Lecturer at RuTC, said, “Students’ reactions to this online concert and what it did to their nerves was very different, but they all did brilliantly. Although the in person audience was missing, the concert opened up the possibility to be watched by so many people, I even heard from former Music students and staff that they watched and enjoyed it.”

The concert is still available to watch on RuTC’s Facebook page or below and donations to Dementia UK can still be made here.