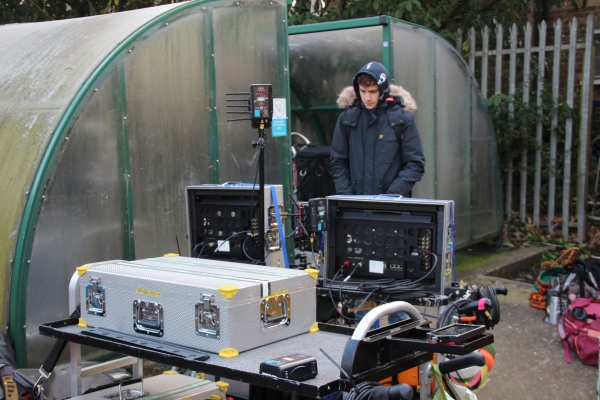 Richmond upon Thames College (RuTC) started 2020 with a major project by welcoming the film crew of the ITV and Red Production Company drama series ‘Finding Alice’, starring Keeley Hawes. The filming took place at the college’s 80 year old building before it will be demolished and students move to a brand new building.

Over the two shooting days in January, James Roberts, RuTC Level 3 Creative Media Production & Technology student, spent time with the crew working behind the scenes and gained valuable experience of the reality of working in the film industry.

About his work experience, James said, “The best thing was to understand all the different operations and job roles behind the camera. In class, we have been researching different jobs in the media industry and it was beneficial to see these in action. I was surprised by the amount of work and time spent filming for a relatively small amount of screen time. I made some contacts on set and the experience itself will be great on my CV and for my future career.”

ITV says that the six-part contemporary drama series ‘Finding Alice’ “focuses upon Alice’s honest, raw, blackly comic journey of grief, love and life after the death of her husband Harry. His accidental sudden death kicks up a storm of secrets and mess, debt, suspicion and criminality which Alice is forced to confront in order to survive.” A release date has not yet been announced.

Sheila Fraser Whyte, Executive Director – Business Development and Innovation at RuTC, said, “Our 80+ year old building has been immortalised on screen by serving the drama series ‘Finding Alice’ and we were very excited to have Keeley Hawes on site. Past and present students will be able to see their old college in the series long after we moved into our new college building this spring.”