Over £2000 Raised at Charity Art Auction 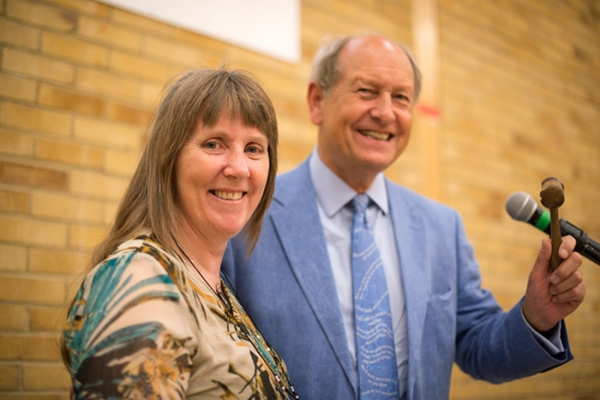 On Friday 9th June, Richmond upon Thames College (RuTC) was the venue for a special charity auction featuring the hidden work of the late artist, Desmond Jones.

Desmond Jones studied at RuTC when it was known as Twickenham Art School in the 1940s.

The auction, which was hosted by BBC Auctioneer Charlie Ross, raised £2575 and benefitted over 30 charities with a local or personal connection to the artist.

Each charity chose a painting from which to receive funds raised at auction and over £1400 was raised in total which included a donation from the BBC Auctioneer Charlie Ross.

Prior to this year’s auction, Desmond Jones’ artwork was exhibited at Orleans House from Friday 12th – Sunday 14th May which was attended by the Mayor of Richmond upon Thames, David Linette.

Elaine Samuels, daughter of the artist, says “we had a really fun evening with a palpable buzz! The charming and outrageously extrovert, BBC celebrity auctioneer, Charlie Ross, was running about, driving the crowd to bid for the vibrant Desmond Jones paintings."

Visit the official website to find out how much each painting sold for.