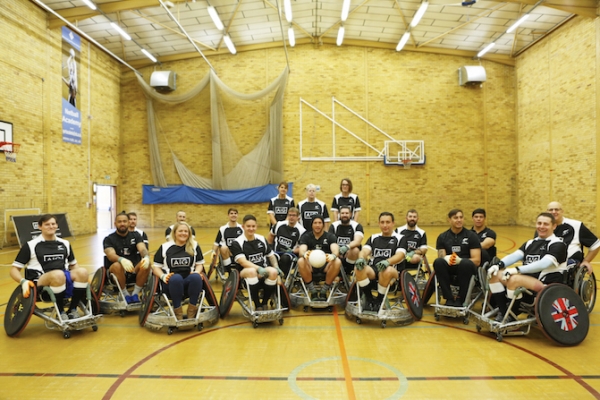 On Tuesday 15th November Richmond upon Thames College (RuTC) hosted an AIG wheelchair rugby event for players from the New Zealand Maori All Blacks rugby team and athletes from H4H Sports Recovery. The session started with a warm-up for the H4H Wheelchair Rugby Team which included Bronze Medallists from the 2016 Invictus Games, a team of wounded, injured and sick veterans. Later, the players were joined by four Maori All Blacks Ambrose Curtis, Marty McKenzie, Matt Proctor and Reed Prinsep. Together, the two teams shared skills and techniques whilst tasked with various wheelchair rugby drills.

The wheelchair rugby event took place just before the Maori All Blacks played Harlequins at Twickenham Stoop Stadium the following day, proud partners of RuTC’s Richmond Education and Enterprise Campus. RuTC’s Women’s Rugby Development Squad players (Heidi James, Celia Duncan, Anna Calvert, Kristen Annabell and Tihana Gordon) also had the opportunity to meet the Invictus Athletes and hear about the challenges they faced and overcame when representing Great Britain at the Invictus Games in Orlando back in May 2016.

Mark Brough, Sports Development and Facilities Manager at RuTC commented, “it was an absolute pleasure to host the wheelchair rugby event for the Maori All Blacks and Invictus Games. We witnessed true strength in character from all players and our students were grateful for the opportunity to meet such heroic figures in the sporting industry.”

Sarah Davies, Corporate Citizenship and Events Manager at AIG further commented, “RuTC provided a fantastic location for the session; it was great to be immersed in the Richmond upon Thames community. The players thoroughly enjoyed their time at the college and we wish RuTC sports students all the best with their future careers.”

*This event was also reported by The Evening Standard

Could not load widget with the id 263.